Mapua School, Mapua, on the South Island was the last stop on the time capsule opening tour of the World Sculptures. It was warm and sunny in December 2015 and very near to the time of summer solstice there in the southern hemisphere.

When I arrived at the school, the teachers and the Principal, Neil Chalmers welcomed me. Children were running barefoot and wearing the blue school hats that they are required to wear because of the thin ozone layer in the summer.

Sixth grade teacher Sharon Prestidge introduced me to two sixth grade girls, Millie and Tyler, who were organizing plans for the ceremony to open the time capsule.

It was a unique and special ceremony. I was struck by the attention to the Maori culture. Millie described the planned performances of haka (dance) by 30 students and mentioned to me that she was one of the dancers and that she and her mother were Maori.


Just before the ceremony Sharon Prestidge gathered all the visitors or guests into a group saying, “We are on the waka (boat) together, (remembering the Polynesian canoes that brought the original people to Aoteraoa or New Zealand) and we are joining in a common purpose. Think of those who came before us, and of the sacredness of the earth under the sculpture.”

We moved slowly toward the sculpture and heard the school children singing a welcoming song to us.

When the girls did their performance it reminded me Hawaiian hula performances I had seen.


Two students who had placed artwork in the capsule in 2007 look through the drawings and sort them to show to others. 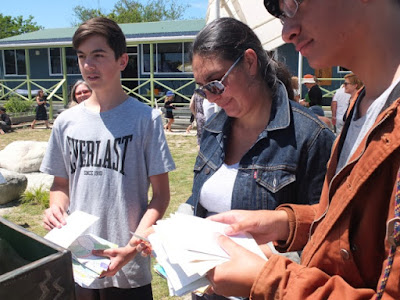 Sharon Prestidge passes them to children. 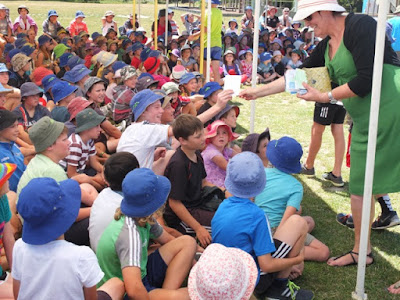 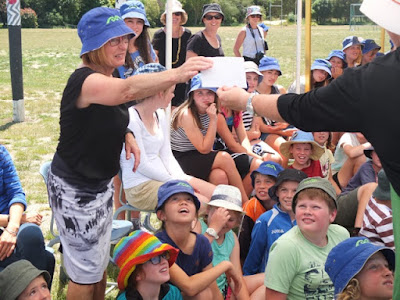 And the capsule is carried back into the Mapua School’s front lobby to rest for twenty-five years until 2040 when it will be opened again. 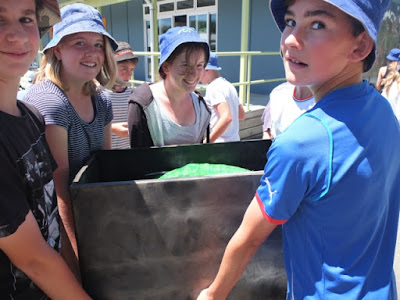 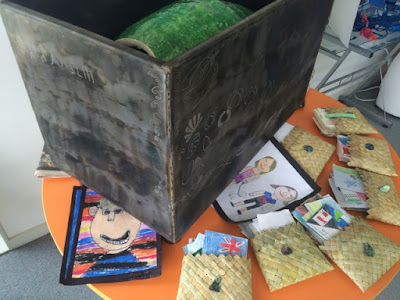 Below are a few selected pieces of artwork made by Mapua children. 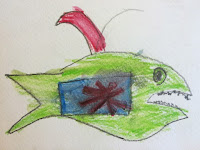 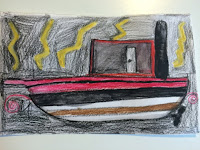 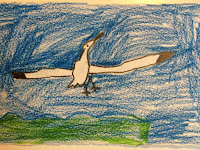 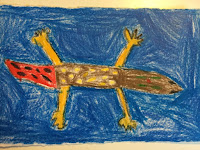 The following pieces were made by children in Vermont and Rhode Island. 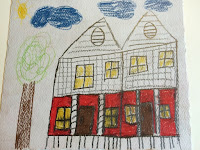 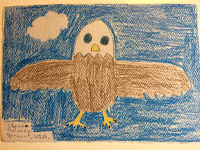 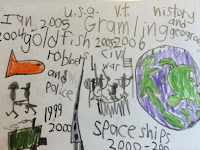 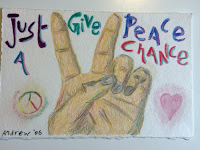 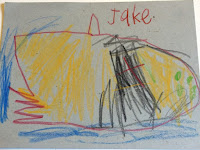 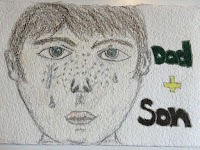 This artwork was made by Japanese children in Izumi, Sendai, Japan. 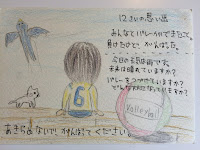 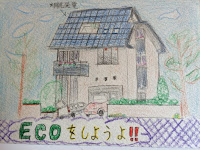 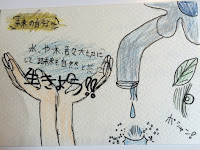 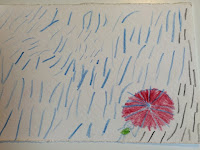 Thoughts about the 1993-2015 World Sculpture Project

If I had to choose one word to describe this 23 years long art project, it would be connections.

My first intention was to connect people and cultures through art.

Making art with children was the most satisfying for me, and just plain fun. I encouraged children to express their feelings: “What is important to you? What are your joys and worries?” They loved making art pieces that could be part of a larger sculpture project. Their enthusiasm was contagious.

And the joy of children singing songs during the final time capsule opening in Mapua will stay with me for my lifetime.

Hawaii and the time capsule opening at ALL ONE


As we set up the tools, tables and tent near the ALL ONE sculpture there was a misty rain. Some called it a blessing that graced the beginning of the time capsule opening ceremony.


In 2002, ALL ONE was installed at the Kapi’olani Community College in Honolulu, Hawaii. I cut the sculpture out of thick “weathering” steel back in Vermont and then shipped it to the college. It was fairly easy to assemble and to install quite close to Diamond Head, at the entrance to the college.


Chancellor Leon Richards greets and welcomes me home. Thirteen years ago in 2002 he was present at the dedication of ALL ONE. 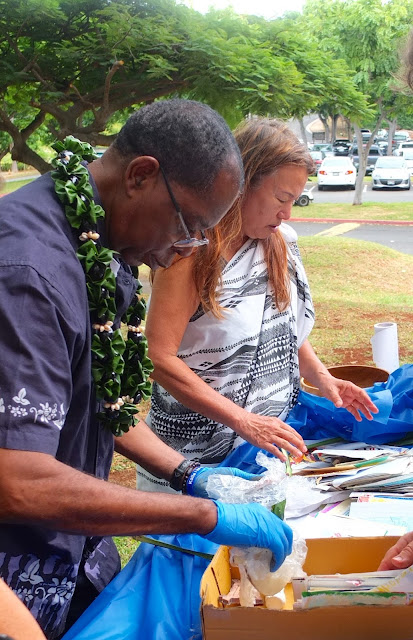 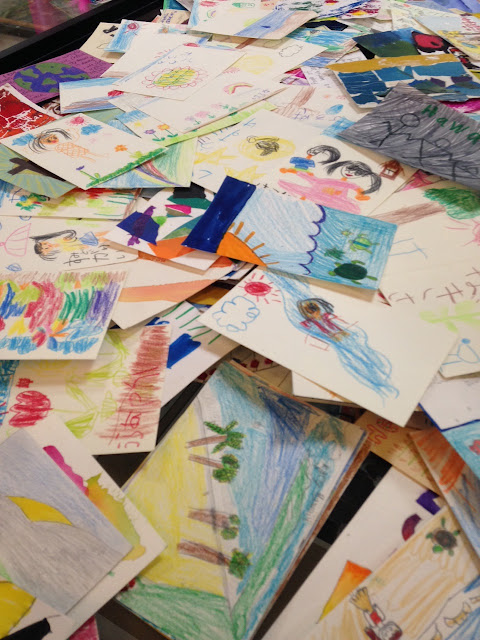 Sorting out the artwork.

Children sent drawings from Vermont, USA; Oslo, Norway and from Sendai, Japan to be included with the Hawaii drawings in the time capsule buried at ALL ONE. 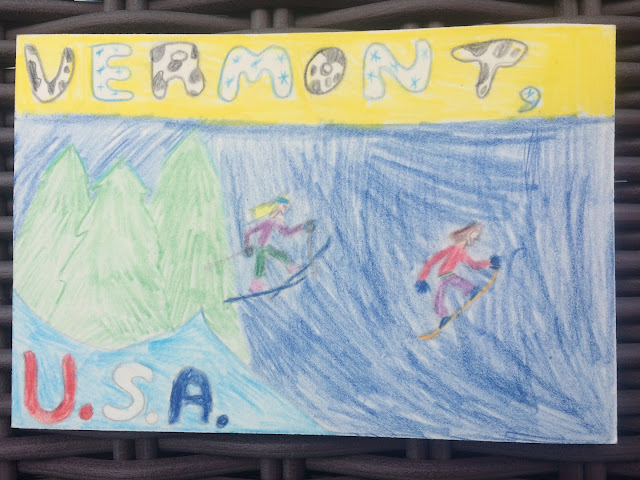 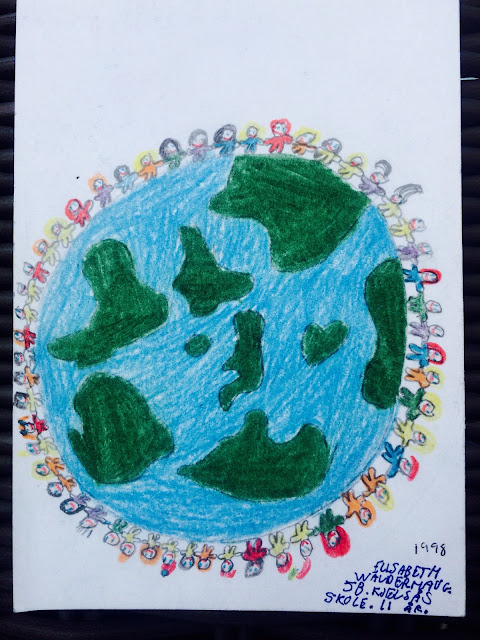 Drawings from Williston, Vermont and from Sendai, Japan. 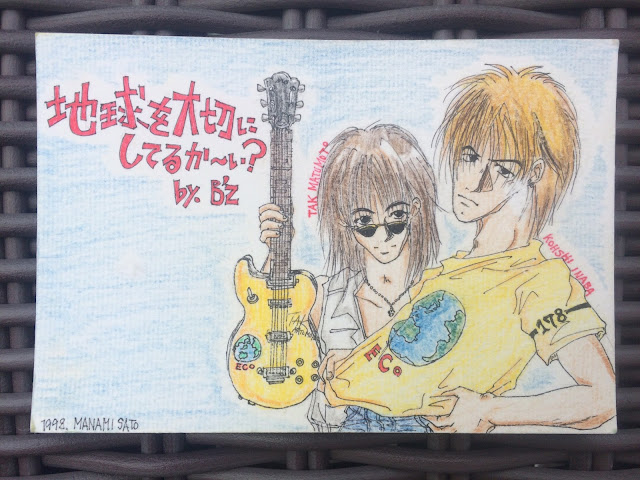 Manga artist Manami Sato from Sendai, Japan did a drawing of her favorite rock stars. 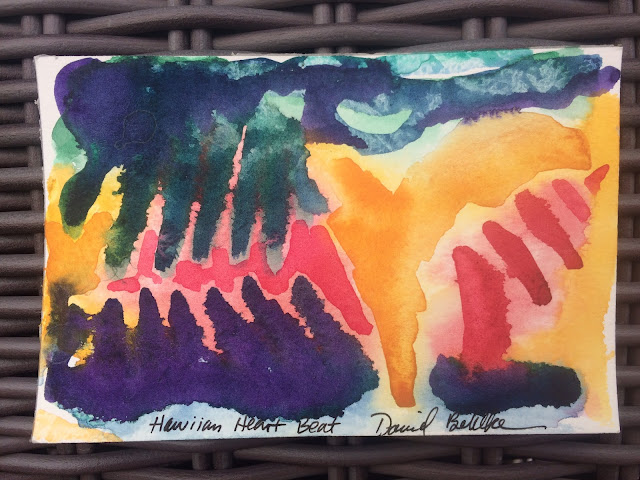 There are two ways that ALL ONE connects with our sun and the stars:


When the “cookie cutter” shape under the sculpture is filled with shadow, the sun is overhead. In Hawaii that moment is called La Haina noon. And it happens twice in a year, before summer solstice and after in late May and early June. At this time at solar noon, a person has no shadow.

The second alignment is more conceptual. ALL ONE faces northeast. Around this time in November, the Pleiades star cluster rises in the east as the sun sets in the west. A heliacal rising. Ancient Hawaiians associated this with the return of the god Lono and the beginning of the Makahiki season.

The Maori in New Zealand call this Polynesian connection the Matariki season. At the TELLING STONES sculpture in Mapua, New Zealand, the angle of the rising Pleiades is marked with a jewel-like stone set into a boulder to the southeast. The TELLING STONES marking of the Maori Matariki season is a southern hemisphere reflection of the Hawaiian season honored at the ALL ONE sculpture in Honolulu, Hawaii.


The final capsule opening in this series of five sculptures will be on December 4 at the Mapua School in Mapua. It is located at 4 Stafford Drive off Aranui Drive south from Nelson on Route 6 turning right on to Route 60 the Coastal Highway.

Mapua has been celebrating their 100th anniversary in 2015. We will be joining the festivities. Come on down! (I wish you all could be with us.)

Kate Pond
Posted by Unknown at 7:09 AM 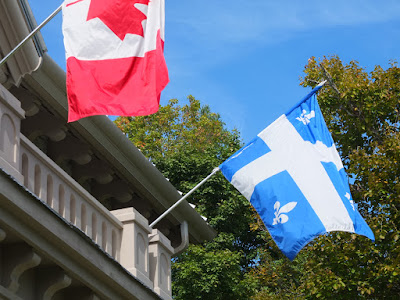 On equinox, September 23, friends and Canadian students gathered at the sculpture ZIG ZAG in front of the Colby-Curtis Museum in Stanstead, Quebec, Canada.

ZIG ZAG is the third of Kate Pond’s sculptures in her World Sculpture Project that she has visited to open time capsules in 2015.

The Colby-Curtis museum is housed in an Italianate style heritage home built in1859. It contains the collection of the Stanstead Historical Society, contents of a 1900th century home and Museum archives.


Chloe Southam, director of the museum and Kate discuss the exhibit at the Museum that documents Pond’s five sculptures in the World Sculpture series.


Friends, teachers and students from the Sunnyside Elementary School in Stanstead gather and dig under ZIG ZAG to find clay artwork and painted stones buried here on equinox in 1995.

Director Chloe and Kate use a Skype connection with Deputy Director Dag Andreassen at the Norsk Museum of Science in Oslo, Norway. Dag smiles while standing beside the SOLEKKO sculpture in the late afternoon sun. 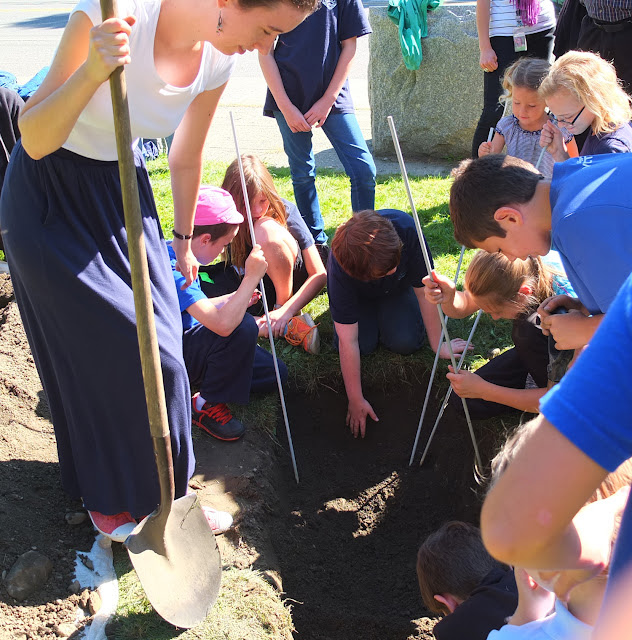 We poke with dowels so as not to harm clay artworks.

Young boy in blue finds foot long tube in the hole and is ecstatic! 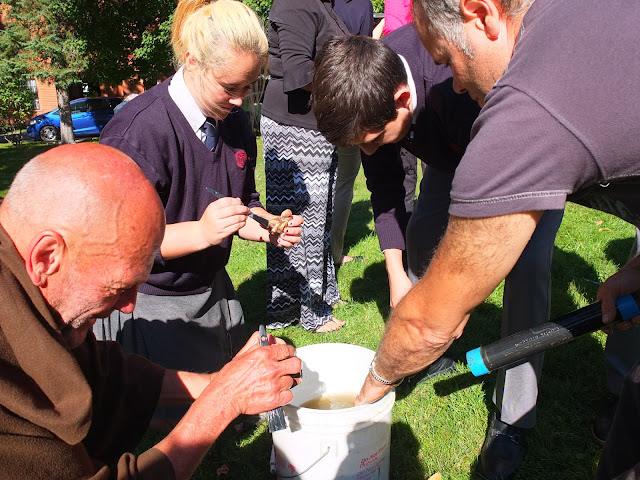 The clay artifacts are carefully washed as they are found. Stanstead College student says: “Maybe I can become an archeologist!” 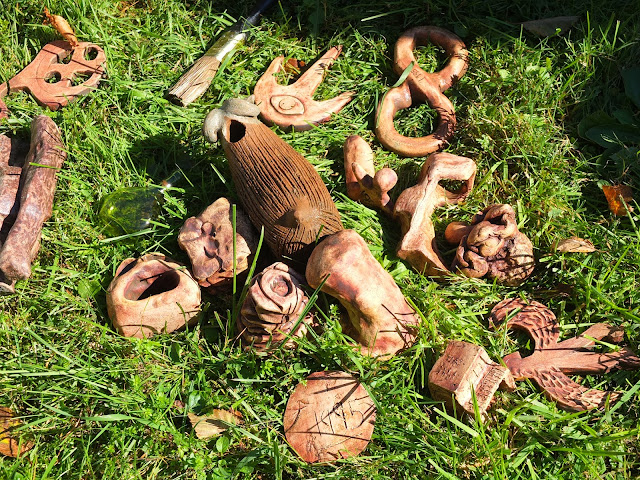 Suspense gathers as we prepare to open the tube.


We find a pair of earrings, a film canister and along with mildewed papers, a photograph of the Essex High School students in Vermont who created the clay pieces in 1995.

We set the sodden papers to dry in the sun, and plan to have photographer Grant Simeon’s black and white film developed later.

Time for a relaxing moment in the sun.

Stanstead College is an independent boarding school for boys and girls in Grade 7 through 12. International students make up a good portion of the student body.


What's next: opening time capsules in Hawaii and New Zealand.


We fill the ALL ONE sculpture’s time capsule in 2002 at the Kapi’olani Community College in Honolulu.

On November 19 at 9am, students will dig up the time capsule and move the contents to the entrance of the college library. An exhibition of photographs, drawings and small clay sculptures from the capsules will be part of a month long exhibition. 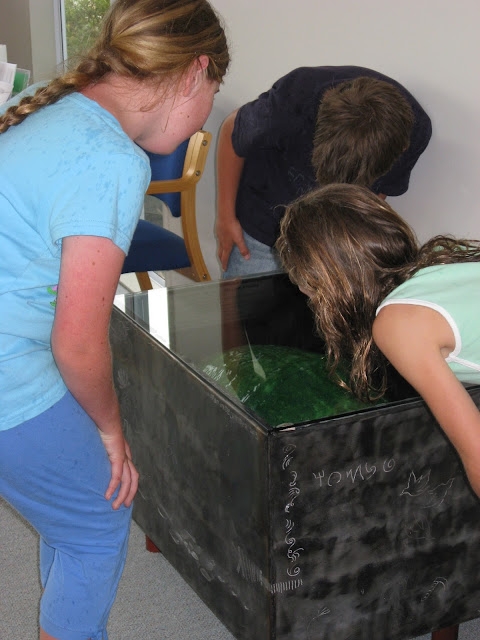 In New Zealand, elementary school children look at the green ceramic egg-shaped time capsule inside its steel sarcophagus. The rough earth near the TELLING STONES sculpture was too difficult to dig so we placed the capsule safely inside the Mapua School in Mapua, New Zealand.

On December 4, if weather permits, we will move the ceramic “egg” time capsule outside near the TELLING STONES sculpture while students sing English and Maori songs. A small exhibit will be arranged in the school’s lobby and the school will host a public reception. All are welcome to attend.
Posted by Unknown at 12:29 PM